A slight revision of my recent redefinition of the political spectrum along psychological lines. I’ve replaced the Beautiful-Safe World axis with the simpler Safe-Dangerous World. The safe-dangerous spectrum is already talked about quite a bit in the literature, particularly concerning Bob Altermeyer’s Right-Wing Authoritarianism scale, so I should stick with that.

So here’s the updated chart: 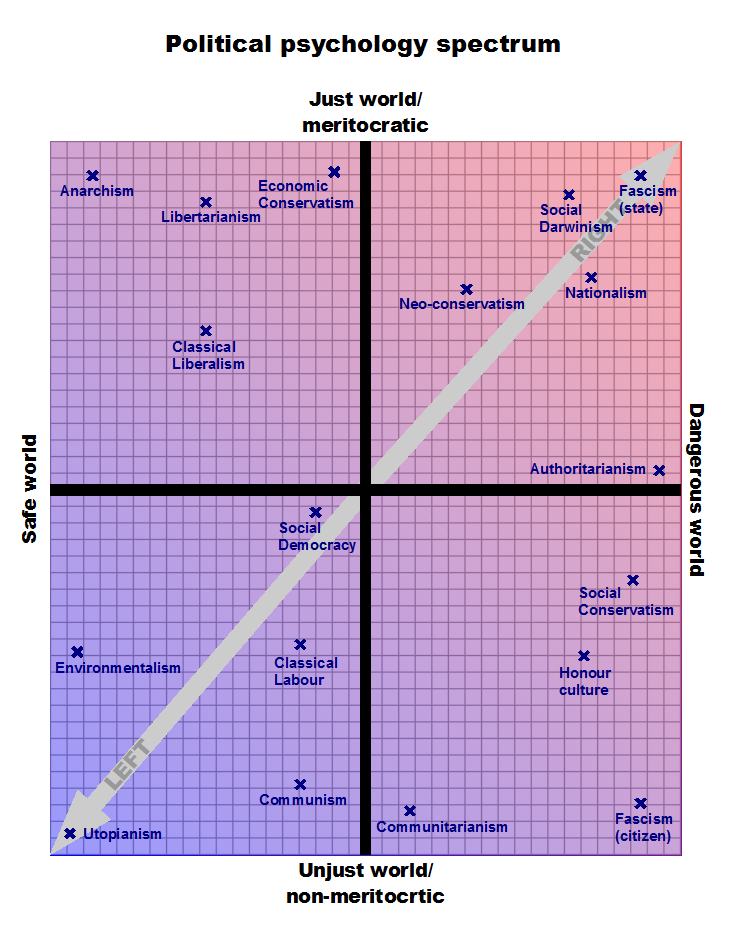 The x axis represents the extent to which an individual perceives the world as a safe or dangerous place (which can scale to the world-at-large, their society or even their local community – with political attitudes possibly varying for each).

The y axis represents the extent to which an individual perceives the world as being just, such that someone gets what they deserve, either good or bad. If reward/punishment are perceived to be the product of luck or randomness, that’s an unjust world. If you live and breathe (and see the world through) the Protestant work ethic, you see a just world.

The ideologies located on the diagram are those that appeal to individuals at that location. Each ideology might be defined in terms different from safe/just world, but ultimately, I’d suggest they’re responding to the concerns of people that hold that particular worldview at that location in the chart.

Note, I also added a couple of new entries:

Utopianism (high Safe world; high Unjust world): by “utopianism” I mean the view that we can become a society where everything works perfectly, and everyone will cooperate for mutual benefit without defection. This isn’t strictly a political ideology, just an example of extremist thinking, in this case optimistic about the world around us and optimistic about human nature to a fault. You see flashes of it when people say “why can’t everyone just get along” and when people sign off with “peace.”

Honour culture (high Dangerous world; mid Unjust world): those who adhere to an honour culture view, particularly when they aren’t required to, see the world as a dangerous place and other people as potentially untrustworthy. As such, reputation management is crucial. To earn a good reputation is hard when there are many who would fake a good reputation in order to exploit others. Being slapped with a bad rep effectively makes one an outsider in their own community, almost an ostracism. Yet it’s a system and mentality that emphasises community standards that ought to be followed, even to the letter at the cost of the spirit.

Also, talking about Right-Wing Authoritarianism, I’d say high RWAs reside in large bubble on the far right of the chart, centred on Authoritarianism. High Social Dominance Orientation (Sidanius, Pratto et al.) would be in a bubble in the top right-hand corner of the chart. I’ll add them to the chart – when I can figure out how to do so in an aesthetically non-disruptive way…