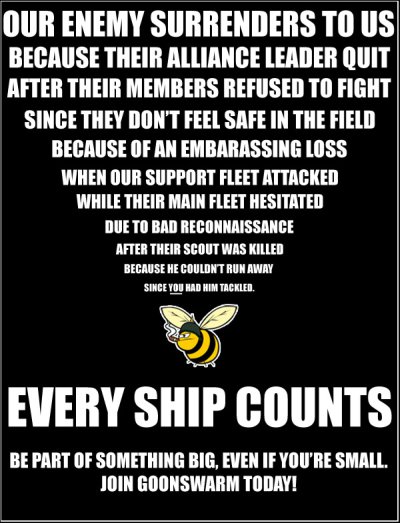 And this is where it gets interesting. First, EVE has fairly loose PvP rules, so in nullsec there’s little stopping a fleet from scooting around and descending on a lone player, destroying their ship and stealing all their stuff. In fact, it’s common. And in EVE, when you lose your ship, you don’t just respawn nearby and carry on. Your ship is gone forever and you’re shunted to wherever you keep your clone – it might be dozens of systems away – and you have to buy and outfit a new ship from scratch. It’s costly and it’s harrowing.

Plus, you can always go out of the game – meta-game – to gain an advantage over rival a corporation. Infiltrating other corporations, spying, abusing them on forums, forming coalitions and generally screwing other corps over is all part of the broader game.

The end result is a study in human nature and politics. Mittani talks of the “space samuri” that populated the game early on. These players had a sense of ‘honour,’ which is not unexpected when people are faced with a frontier culture. Without external rules to censure anti-social behaviour, honour steps in as an internal regulator.

Honour is a kind of implicit social contract with suspicious overtones, where reputation and restraint are king. If one person breaks the code of behaviour, they are collectively shunned or punished by the others. As such, a semblance of order can exist.

(To test this idea, I wonder if individuals in the early days of EVE would engage in altruistic punishment by attacking, or refusing to deal with, individuals who were known for anti-social behaviour. That’s what I’d predict would happen.)

An honour culture is like a ‘grudger’ strategy in the iterated prisoner’s dilemma. It starts by cooperating, but then severely punishes defection. However, if too many people break the code and defect, it descends to the Nash equilibrium of mutual defection, and everyone loses. 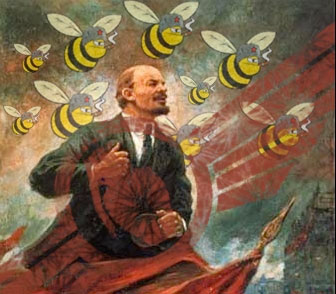 The result was that the community turned on Goonswarm. But the Goons won by employing the very same no-holds-bared tactics – including the unprecedented move of having a defector from a rival alliance (a coalition of many corporations) disband that alliance. No-one saw that coming.

However, all this is only possible because of EVE’s loose laws. Nullsec space is always nullsec. Players can band together and enact their own form of policing to maintain order, but they can’t change the external institutions to do the policing for them; i.e. they can’t turn nullsec into highsec and track violations and exact punishment in any consistent way.

As such, nullsec will always remain a frontier – which is unrealistic outside of the game. Any frontier culture is unstable, and is vulnerable to defectors and anti-social behaviour. Laws and policing – with a modicum of autonomy and some checks and balances – are an effective way to ‘civilise’ a frontier culture and encourage cooperation. You can’t do that in EVE.

So nullsec will always offer an intrinsic advantage to the likes of Goonswarm. The error of the earlier ‘samurai’ corporations was not identifying this. In fact, it seems the early Goons didn’t realise this – natural selection just favoured their strategies in that environment.

Another parting comment: The Mittani says he runs Goonswarm as an autocracy rather than a democracy. Why?

Autocracy is the most effective form of government in null sec [the enormous sections of space within Eve Online with no AI police, where players rule themselves]. Council systems don’t work very well… Democracy is death. In a situation where you need to be able to respond quickly and with force to strategic problems, invasions or what have you, you can’t wait for a vote.

This is a fascinating rumination on one of the weaknesses of democracy. In a hostile environment – including one that requires rapid decisions to prevent invasion and potential destruction – democracy falters. Interestingly, Alexis De Tocqueville said something very similar in Democracy in America:

If a democratic country remained during a while century subject to a republican government, it would probably at the end of that period be richer, more populous, and more prosperous than the neighbouring despotic states. But during that century it would often have incurred the risk of being conquered by them. (DiA, vol 1, ch 13)

What he’s saying is that democracy allows cooperation to flourish, but leaves itself vulnerable to invasion by more singular and cohesive forces – like autocratic corporations.

EVE is truly a fascinating game. While I’ve played it on and off a few times and never managed to find it enjoyable myself, it is one of my favourite games to read about. Politics, psychology, game theory and even economics are all on show. EVE is effectively a brilliant social experiment that creates an environment with certain fixed rules, and a lot of gaps, and lets evolutionary forces determine which strategies are the most ‘fit’ in that environment.

However, I do fear that the Goonswarm represent the dominant strategy in nullsec today. And without the ability for players to implement government and external sanction, that will remain the case. Whether the community would want that is another matter. In the mean time, I’ll be watching EVE closely to see what I can learn about politics and human nature. And mining asteroids.