Published by timdean on 16th September 2011

Penetrate the hoo-ha and self-aggrandising bluster about attributions of what, or who, caused the Arab Spring, and there might actually be some truth to the notion that social media, and Twitter in particular, were pivotal to sparking the revolutions that have punctuated the Middle East and North Africa.

This is a bold claim, but one I think might be justified by looking at the problem of starting a revolution through the lens of game theory, and the Stag Hunt in particular.

The problem with kicking off a revolution in a nation run by a paranoid autocrat is you simply don’t know whom to trust. Sure, you can probably assume that most of the population would be happy to see the tyrant turfed from power – after all, the nature of such regimes is that few benefit at the expense of many, and it’s the many who want to see the revolution get underway. But even if only one in ten individuals is pro-regime, or likely to dob you in to the regime’s thugs to save their own neck, the risk of voicing your anti-government attitudes is high, especially given the potential cost if you grumble to the wrong person.

This reluctance to fly one’s flag is one of the great hurdles to overcome before the people can band together and use that potent resource of overwhelming numbers to bring down even a powerful minority autocracy.

This dilemma can nicely represented by the Stag Hunt: 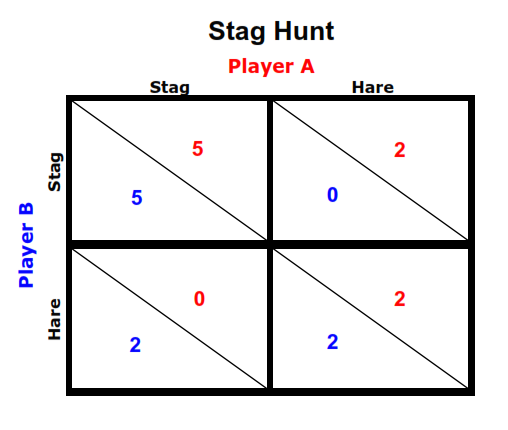 In this context, hunting Stag is declaring one’s revolutionary intentions and agitating for a better government that can benefit all. Hunting Hare is keeping one’s head down and suffering the regime. Should two revolutionaries get together, they can cooperate to help bring down the government and implement a better system with less corruption and waste etc. However, should a revolutionary meet up with a non-revolutionary, they risk being exposed, and punishment could ensue, while the non-revolutionary just continues plodding along under the oppressive regime.

The trick with the Stag Hunt is there are two equilibria: Stag-Stag (SS); and Hare-Hare (HH). It’s the mixed strategy of Stag-Hare (SH) that is unstable, and any system over time (excluding factors like non-random pairing for the time being) would expect to gravitate towards one of the two equilibria. The thing is, the basin of attraction of HH is significantly larger than that for SS, so most systems (75 per cent, to be precise) descend into the lower-payoff equilibrium of HH (read Skyrms, 2004 for more).

So, most societies where declaring one’s anti-government sentiments in public can be unwise, you’d expect people to more or less uniformly keep their heads down and play Hare all the way. And that’s what you saw in places like Libya. People were doing it tough, but that’s preferable than agitating towards something better and getting dragged away in the middle of night.

There are several ways of nudging the equilibrium from HH to SS, but there’s a considerable gulf of SH to overcome in the process. Spend too long in that gulf, and things will rapidly drop back to HH.

Now, Twitter can’t solve the whole problem of starting a revolution, and the Stag Hunt doesn’t represent every nuance of the revolutionary dilemma, but if there’s something to this analysis, then perhaps Twitter, and other social media, did in fact play a role in sparking off, if not finishing, the Arab Spring revolutions.

I don’t use twitter. Was twitter, as used to foment the Arab spring, anonymous or for some other reason not likely to reveal rebels to the government?

Regardless, an interesting application of game theory to a practical problem.

Perhaps there is some extractable moral wisdom for groups here concerning the moral value of anonymity. I have been thinking of anonymity (not knowing people’s reputation) as decreasing the benefits of cooperation in social groups and immoral from that perspective. You cast new light on the subject.