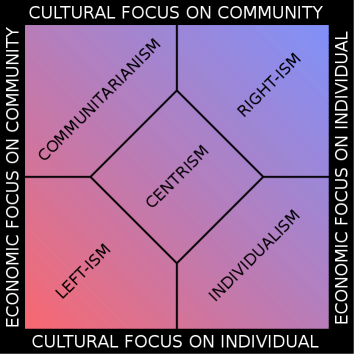 END_OF_DOCUMENT_TOKEN_TO_BE_REPLACED

Here’s a thought in the which-comes-first-political-ideology-or-political-psychology? department. The answer to which could well be: both. If so, then perhaps some bastardisation of the process of reflective equilibrium could benefit our understanding of political ideology as well as the way in which people are actually motivated to behave politically.

See, for decades it’s been the remit of political scientists to explore the nature of political ideology, to construct definitions and to investigate the way people behave in a political context. Yet political science operates in a highly rarefied environment. It looks at ideology in theoretical terms, almost as if the various ideologies exist in the world to be discovered as various objective ways of being or of running society.

It also often abstracts the messy complexities of human behaviour down to the clean quantifiable lines of rational choice theory. It’s a very top-down approach, starting with theories of political organisation and then noting how these completed, coherent ideologies are disseminated down to the people.

But this approach has its shortcomings, particularly in explaining how and why individuals adopt a particular political ideology, and how that ideology motivates their behaviour. Because people aren’t rational agents and ideologies aren’t clear cut things that people adopt holus-bolus.

Top-down political science even had an ‘end of idology’ crisis through the late 20th century, where ideology was nearly abandoned as a concept because it was conceived as too far beyond the ken of the average schmo to comprehend the complexities of an entire political ideology (Jost, 2006). As such, it was thought most people’s attributions and identifications with one ideology or another were incomplete, misguided or disingenuous. Ideology was on shaky ground.

Yet political ideologies are important. They do influence beliefs. And they do motivate behaviour. But not in the abstract way outlined by many political scientists in the 20th century.