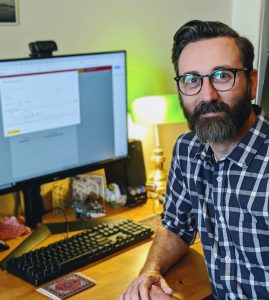 Here are some of the plates I juggle:

I’m currently writing a book (title TBA) published by Pan Macmillan arguing that the way we think about morality is burdened by evolutionary baggage, often causing it to be out of step with the modern world. It covers issues like racism, sexism, political tribalism, online outrage culture, religion, consumptive capitalism and more. It’s due out in 2021.

I’m also a facilitator and teacher specialising in philosophy, ethics, critical thinking and emotional intelligence. I have been a core faculty member at The School of Life Sydney, delivering a wide range of talks, workshops and seminars for business and the general public. I also run philosophy workshops in schools around Australia and am a volunteer with Primary Ethics in NSW.

I co-host a podcast with the amazing Dr Monty Badami called The Meaning of…, in which we explore where we find meaning in the modern world, tackling issues like sex, death, race, culture and even COVID-19.

I also work on the Universal Commons project, led by Australian businessman and philanthropist, Alan Schwartz. We are working to make the economy more ethical and sustainable by moving from our current “Parasitic Capitalism” to what we call “Mutualistic Capitalism”.

I have written for popular outlets, including New Philosopher, New Scientist, Popular Scientist, Cosmos, The Sydney Morning Herald, The ABC, Acuity Magazine and many others, and regularly appear on ABC Radio and TV.

I have been Science and Technology Editor at The Conversation, and have edited industry-leading publications including Cosmos, Australian Life Scientist and PC & Tech Authority magazines.

I am available for writing, facilitation and speaking engagements particularly in the areas of philosophy, ethics and science.