When you read about secularism and Humanism, you read a lot about reason, compassion, anti-dogma, tolerance, free thought and free speech – and lots of other wonderful things.

But one thing you don’t read much about is wonder itself. 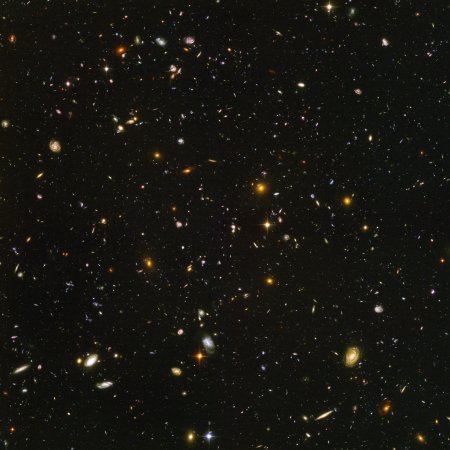 All those specs are galaxies. Tell me that doesn't blow your mind.

I’ve said before that Humanism and secular morality still have a long way to go to challenge the established religious ideologies in the world. And one reason is they’re still couched largely in dry, rational language.

That’s understandable – not only is Humanism a movement that is founded on the principles of reason, but the early adopters are typically those who have embraced reason of their own accord and only then found their way to Humanism.

This means they’re not normal. Most folk live their lives, happily believing what they believe. Few people voluntarily shrug off the warm embrace of their cultural and ideological norms to follow the rocky path of reason to unknown lands. It can be a harrowing journey, and it can lead to not insubstantial angst.

Yet Humanism is couched in its own kind of revelationary language – that of reason. It appeals to the people who have already made the emotional leap to give sovereignty to reason. And it doesn’t appeal to those who find reason emotionally unappealing, who believe elevation is a religious experience. It’s not.

This is why I think wonder is central to any future secular morality, Humanism included.

Wonder is tool already employed by supernaturalist religions, but it doesn’t belong only to them. Anyone who has gazed into the night sky, peered through a microscope, lingered over a sunset or pondered the nature of DNA or prime numbers has experienced wonder. And it’s natural wonder. Rational wonder.

Conversely, wonder also erodes our complacency in taking our existing knowledge for granted. Knowing that all elements on Earth heavier than carbon – including the iron in your blood – were formed in the cataclysmic death throes of a giant star doesn’t make that fact any less astounding. We should revel in this knowledge, share the wonder of this knowledge, not just chalk it up on the board and move on.

Let’s think beyond just reason, and beyond just our opposition to dogma and the supernatural. Let’s think about what we want to engender. And besides reason, we need wonder.

6 Comments on On the Importance of Rational Wonder

3Pingbacks & Trackbacks on On the Importance of Rational Wonder