Published by timdean on 7th February 2011

I’ve been struggling to articulate an aspect of my unfolding story of morality as shaped by evolution, and one of my key criticisms of moral realism. And I think I might have stumbled on a metaphor that expresses this point.

Moral realists often talk about the reality/objectivity of moral facts. ‘It is wrong to kill an innocent person’ is true or false, and moral enquiry is about figuring out which of these moral facts is true, and then translating them into norms, like ‘you should not kill and innocent person.’ 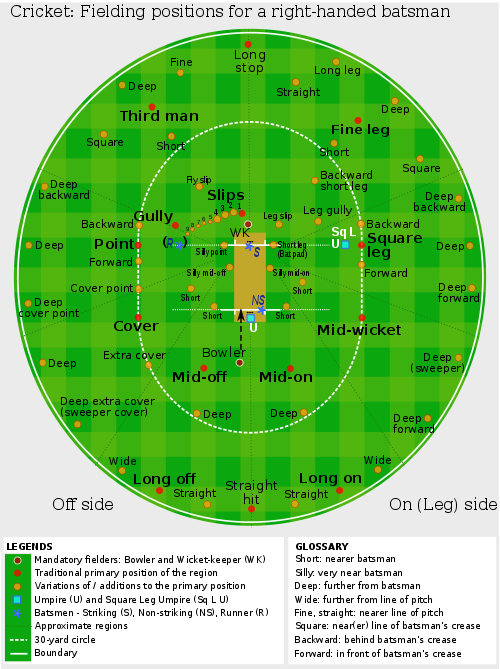 Cricket is almost as complex as morality.

Moral anti-realists often suggest that the facts and their corresponding rules aren’t real/objective, just like the rules of cricket: there’s nothing written in to the fabric of the universe that necessitates that a ball caught on the full by a fielder gets the batsman who struck it out. But all the players tacitly agree on the rules before engaging in the game, so one can still make meaningful assertions about whether someone ought to be out or not after being caught on the full.

I’m sympathetic to this anti-realist response, but I don’t think it captures precisely my objection to moral realist talk.

Instead of talking about moral norms as the binding rules of the game – the inescapable rules to which one must adhere if they’re to play – I prefer to talk about norms as strategies for winning the game.

The rules set the winning conditions, and I agree they are tacitly agreed upon before playing, although there’s still room for debate about them in detail and there will likely always be borderline cases and ambiguities that can be argued over.

These rules might set the conditions of play, but the bulk of moral norms constitute strategies of play. And there’s no one strategy that works best in every circumstance. Even if we could come to total agreement on the rules, there’d still be room for diversity of strategies.

That’s not to say that some strategies are measurably worse than others. And some are downright appalling and are clearly unlikely to help you succeed. There are also some that break the rules, and they’re just not on.

But there will inevitably be a diversity of strategies to choose from, and which one succeeds depends not only on the strategy itself but the environment in which it’s played – and that environment includes the strategies employed by the other team, if you will.

Moral Assessment is pointless unless it is possible to find out about some moral sentences that they are true. I take the idea that morality is ‘objective’ to be, at heart, the idea that this condition is met. (Judith Thomson in Harman & Thomson, 1996, p.67).

Strategies aren’t true or false. But that doesn’t make talking about them pointless. There’s nothing true or false about putting in a fourth slip or employing a right-arm pace bowler around the wicket against a right-handed batsman, but it’s not pointless talking about doing so.

So, instead of talking about moral facts and moral norms as being these fixed and immutable things, if we talk about moral strategies we open the door to talking more fluidly about them.

Granted, one might be able to construct a version of realism that sets a few basic factual ground conditions, like declaring some fundamental intrinsic values, and then allows a pluralism of strategies to promote those values. I don’t think it’s necessary or helpful to do so, but you could.

So yeah. Not sure if the metaphor of cricket is terribly helpful, but I find I’ve long been thinking about morality as a system of strategies for enhancing cooperative and cohesive behaviour rather than about moral facts of binding norms, and this could be one way to make that point. Dunno. You tell me.

A very promising idea. It resembles what people actually do. Very deep.

I suggest against starting with sports metaphors due to it may be misleading in a critical sense.

The rules of sports have no basis in the fundamental nature of the universe.

In sharp contrast, virtually all past and present cultural moral standards that advocate unselfish behaviors appear to have a basis in the fundamental nature of the universe. They are virtually all strategies defined by the mathematics of game theory for increasing the benefits of cooperation in groups. These strategies from the mathematics of game theory are cross species applicable and were available when the fusion fires of the first star lit (though there was no biology then to exploit them) and will be available for tens of billions of years after the sun swells to a red giant and envelopes the earth. That is about as an objective a source for morality as we could hope for and is a far more reliable basis of morality than some tacit agreement on the rules before engaging in a game.

Perhaps once you have firmly established the idea of the objective basis in the nature of the universe of a fundamental moral principle such as “Unselfish behaviors that increase the benefits of cooperation in groups are moral behaviors”, you might move on to sports metaphors and be able to usefully say:

“Strategies aren’t true or false. But that doesn’t make talking about them pointless. There’s nothing true or false about putting in a fourth slip or employing a right-arm pace bowler around the wicket against a right-handed batsman, but it’s not pointless talking about doing so.

I think the sports analogy is an apt one. Strangely enough I had recently been thinking about how different people have different thinking styles and thought of sports strategies as an analogy. I was surprised to see the analogy here and applied to morality, but I think it works very well.

I like your point about how strategies are not true or false. I had trouble finding good analogies for thing where true and false are not particularly meaningful, yet better and worse are very meaningful. There are often unifying principles that most good strategies share; however, many times you can find a good strategy that doesn’t follow the unifying principle and yet still works. Often there are good strategies that are strikingly different from each other. Strategies frequently have certain conditions where they succeed better and conditions where they fair worse.

At risk of taking the analogy too far and running off a cliff. The sports strategies that people prefer is often related to their personality, abilities, preferences, and the way they were taught. I like the analogy a lot because you can run with it in many different directions.