It seems to me we start with phenomena. The world is full of the stuff. On the surface, phenomena appear chaotic, unconnected, random even. But eventually regularities appear. We start to reckon there might be a simpler underlying explanation for the melange of phenomena. We posit a theory.

A good theory has both simplicity and explanatory power. By figuring out how the smallest number of moving parts work, we can have a nice parsimonious account of why the confluence of phenomena appear as they do.

Once you start on this path, it’s easy to want to keep digging until you reach the smallest possible number of moving parts that can potentially explain all phenomena. This is typically accepted to be physics.

But such ‘reductionism’ is problematic. Sure there’s an account of how the movement of traffic through city streets is reducible in principle to the bumping around of countless sub-atomic particles, but attempting to explain the former in terms of the latter is generally considered a fruitless endeavour.

One might even argue that a completed grand unified theory of physics won’t necessarily shed any light at all on traffic phenomena.

This might not be the case if the world was linear, in the mathematical sense that simple inputs lead to simple outputs. In this case, a completed unified theory of physics would genuinely explain everything.

But, in fact, the world is frustratingly nonlinear, such that simple inputs can lead to complex outputs. A theory that gives a simple explanation at one level might yield an unmanageably complex explanation at another.

However, while physics might not be useful in describing how traffic moves through city streets, another theory unrelated to sub-atomic particles might do the trick. In fact, there might be some fairly parsimonious models that can account for this phenomena without recourse to anything concerning sub-atomic particles at all. The study of traffic flow might even become its own discipline.

So, we have the beginnings of an explanation as to why there might be so many disciplines, carved up as they are.

But I think there’s more to this story. Because the disciplines we have aren’t randomly distributed. It seems as though there are certain points on the reductionist sliding scale where it makes sense to have a discipline, and others where it doesn’t. Physics makes sense, as does chemistry, as does biochemistry. But why carve up the phenomena at these particular points? 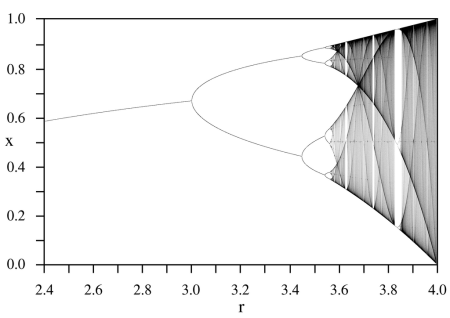 And here’s the crux: because these points, marked out by disciplinary focuses, represent those points where we can concoct parsimonious explanations of phenomena, and this is because they represent points where nature itself coalesces into fewer moving parts which are, in turn, easier to describe.

Like a bifurcation diagram, there are points where nature galvanises into simplicity, and points where it is naturally complex – at least in terms of description.

However, other disciplines will be on different levels, and will be separated by a complexity barrier where explaining one level in terms of another is just unmanageable.

But… that doesn’t mean disciplines on different complexity levels have nothing to offer each other. Indeed one of the most fascinating aspects of nature is how the same mathematical constructs appear at different levels of explanation – the fractal nature of nature, if you will.

This means an abstraction at one level might be analogous to an abstraction at another, even if one might never deign to attempt to explain one level in terms of the other. The movement of traffic through city streets might be analogous to the movement of blood cells through blood vessels, even if one need never mention blood in describing traffic phenomena. The mathematics, the model and the system might be similar even if the constituents aren’t.

So, back to interdisciplinary research.

It seems to me this implies two broad approaches to interdisciplinarity:

1) Facilitate communication between disciplines at the same level of complexity in the hope they can cross pollinate and learn from each other, given their base level of explanation. For example, politics, sociology and economics all operate in roughly the same level, where the element is groups of people. I call this horizontal interdisciplinarity.

2) Facilitate the sharing of systems, models and abstract tools between disciplines at different levels of complexity, even if they’re separated by a complexity barrier. For example, natural selection as a model operates on phenomena as disparate as biology, economics and neural networks. I call this vertical interdisciplinarity.

And importantly, one shouldn’t conflate these two approaches to interdisciplinarity.

To put physicists and psychologists in the room in order to explain mental illness won’t get you far. Put them in a room to talk about the concept of inertia, and maybe something interesting will emerge.

Isn’t there something also to be said about our language and psychology? Language breaks the world up into pieces based on our interests — mainly practical ones. I don’t think our original interest is physics, I think we’re more interested in psychology. We already have instincts that help us interpret the world as soon as we see it, and language reinforces these instincts. We then categorize things based on our interests. We aren’t interested in “halfbits” (half rabbits). We are interested in whole rabbits (two halfbits combined in the right way).

It’s not only easier to explain traffic without physics, but the way we explain traffic (and human psychology) tends to be based on practical concepts that make our understanding quick. We can talk about beliefs and desires because the reality might be a lot more complected than those words would imply, but those words are still incredibly useful for communication and decision making.

I highly recommend this book I read a couple of years ago…there’s a lot here for this type of research, but I haven’t been able to go beyond some general principles of human evolution, and biology, and computer organization.

Pattee, H.. H. (ed.) 1973. Hierarchy theory: the challenge or complex systems. Braziller, New York. This edited volume has some classic articles by Pattee, Simon and others.

I think you would be very interested in the work of J.T. Fraser. He was a philosopher of time, and his explanation of the disciplines in relation to interdisciplinarity should be of interest to you. I recommend particularly “Time, Conflict, and Human Values.” He is particularly interested in complexity. I discuss these sorts of things on my own blog as well.

Brilliant. Lately I’ve tried to get the point across about levels of explanation to some stubborn people. I think it is a vitally important aspect in one’s approach to projects which involve more than one field of study—to recognize the levels and to not conflate them. Confusion happens a lot in the junction of neuropsychology and philosophy of mind these days.

James makes a good point about language—folk concepts should be preserved, because they help us get ideas across quickly. That’s why I think eliminative materialism is taking it too far, same with any other extreme reductionism.