Which Comes First: The Moral, Or The Ecology? 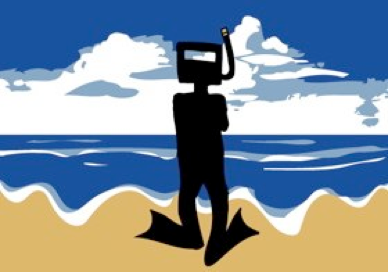 And these patterns match what we’d expect to see when we do a strategic analysis of social behaviour, such as game theoretic analyses. These show that many social problems – such as how much one ought to trust others, or how much one ought to punish transgressors – have no single optimal answer. As such, often a pluralism of strategies within a population will most stably produce high levels of cooperation rather than the entire population pursuing the same strategy.

So, that’s my thesis: that the nature of social life placed selective pressures on our psychology producing and maintaining these polymorphisms – perhaps manifest in variation in emotional responses or variation in personality traits – that produce a pluralism of social behavioural strategies.

The Chicken and the Dog

As I was informed by many of the PBDB attendees, life is rife with variation. Variation is the norm, and is not necessarily the product of natural selection but is a cause of natural selection. Mutation and recombination produce new phenotypes, and it’s this variation upon which natural selection acts, tending towards phenotypic stability when an adaptive trait is found. As such, uniformity, not variation, is the interesting exception that demands an evolutionary story to be told.

If a species has noses that vary in size and shape, that (alone) doesn’t hint at any adaptive explanation for the variation. However, if the species have noses that are all strikingly familiar, then that’s something worth investigating.

Furthermore, adaptive polymorphisms in behaviour aren’t unique to hominins. Fish, birds and especially higher primates often exhibit quite visible phenotypic (and likely genetic) polymorphisms when it comes to things like risk taking or what we might call introversion/extraversion. So the psychological variation in humans, where it exists, might have arisen long before we split from the other great apes to form the hominin line.

If that’s the case, then a chunk (not a pivotal chunk, but a sizeable chunk none the less) has been carved from my thesis.

The Egg and the Tail

However… while I take the above points very seriously, I don’t think they represent a knockdown rejection of my adaptive story of human psychological variation and the impact it has on social/moral behaviour.

Firstly, variation might well be the norm, but when that variation follows particular patterns, it’s no longer easily dismissed as a product of mutation, recombination and drift etc. In fact, if a trait varies predictably along particular dimensions and in particular proportions within the population – say half the noses are short and snub, and the other half are long and pointy – that trait is not variable in at least one important sense. Certainly, the morphology might be variable, but the pattern of variation is relatively uniform – and that uniformity is something worth looking in to.

And I think there’s ample evidence to suggest there are predictable patterns in psychological variation. Personality types vary along predictable dimensions (as mapped by the Big Five – Openness, Conscientiousness, Extraversion, Agreeableness, Neuroticism – for example) or integrative complexity.

Granted, I’m leaning on emotional variation to explain things like dispositions to trust or punish, and emotional variation is harder to slot into the more complex channels found in personality. Anger might just vary due to non-adaptive reasons, for example. However, it seems striking that variation in anger responses might produce behaviours that correspond closely to the expected behavioural patterns we see from game theoretic analyses. But that might be my bias showing.

As for the notion that such adaptive polymorphisms that do exist emerged prior to the evolution of hominins, thus predating the complex and heterogeneous social environment that I’m suggesting produced the adaptive psychological polymorphisms… I don’t think that deals a crippling blow to my theory.

It might be that the salient adaptive landscapes that produced these polymorphisms – such as the trade-off between risky and cautious behaviour – prepped us for dealing with similar trade-offs in the hominin social environment, with the latter then maintaining the polymorphism.

If that’s the case, it weakens my argument – it makes some psychological variation an exaptation rather than adaptation – but that doesn’t mean the variation isn’t still interesting.

I still have some work to do in order digest the feedback to my talk, and I may yet have to make some revisions to my thesis – or even drastically cut the amount of talk I have about adaptive human variation due to the Pleistocene social environment. However, my core thesis of the importance of understanding ‘moral ecology’ stands.

Moral ecology is the independent notion that many of the problems of social living have no single solution that produces optimal levels of prosocial and cooperative behaviour. As such, a pluralism of behavioural strategies can often produce the most stable and cooperative social groups.

We appear to have psychological variation that promotes such a pluralism of strategies, and this may be a coincidence, or purely a result of environmental variation and cognitive plasticity. But it’s still possible that there is an evolutionary story to tell. And I’m still going to have a crack at telling it.

I see this having something interesting to say in terms of group selection. I noticed in the talk you eluded to examples that had this kind of logic: a population of ubiquitously trusting individuals would fair much worse than one that had some healthy diversity in this regard.

This is just idle patter on my part, but something like this: We need variation between groups for it to work, but a fitter group so to speak would be one that is not simply more cooperative, but that is flexibly so, just like an individual. Conditional cooperation is pretty key in individual behaviour. Simply graft this logic onto the group at large, and the source of that ’flexibility’ is moral ecology. In the group selection issue, the fundamental problem of social life as Williams explained is tempering within-group pressures. Moral ecology is saying ”the problems of social living have no single solution that produces optimal levels of prosocial and cooperative behaviour.”

This intuition isn’t yet complete–perhaps I can think on it more if you put up snippets here and there on your blog.

Now I have been wondering about when we reduce stuff to psychological dispositions, like trust for instance. There was research conducted among a group called the Shona of Zimbabwe, in two villages in which one was resettled and the other very well established. The resettled village was less trusting, taken from trust games and other methods. There a million examples like this and i’m sure you’re aware of lots of them, but what I’m interested in is at what point can we safely draw the line and denote something as a disposition? Perhaps this doesn’t matter, but I was wondering. This is the challenge of bringing something back to psychological types rather than outward behaviour and remaining agnostic, but so what? I think what you have to say is really interesting.

It was really smoothly delivered talk too, and i concur with your closing remark!

The Philosophy of Biology at Dolphin Beach meeting sounds like it was a lot of fun. I am envious, in a good way of course.

If you are not already doing so, it might be a good idea to address the objection that the biology underlying the human conscience is an additional explanation (in addition to biological diversity) of the commonly observed “polymorphism of psychological traits that promote a range of behavioural strategies when it comes to social living” … “that produces optimal levels of prosocial and cooperative behaviour.”

That is, a polymorphism of observed psychological traits such as trust, forgiveness, and anger could be observed among biologically identical agents if they have different experiences in what is nominally the same environment or culture. The biology of our conscience is what motivates altruism, loyalty, guilt, shame, and indignation (anger directed at punishing bad behavior). But what circumstances trigger these motivating emotions and the intensity of those emotions are largely learned (as is obvious from historical cultural variations). Even biologically identical agents could have radically different experiences in the same culture, and show a strong polymorphism of observed psychological traits.

@Henri
I think there could be an interesting group selection component to what I’m talking about, whereby the fitness benefit of the polymorphism can be realised when one diverse group is competing with a less diverse group.

Wether the individual fitness story is enough to account for the polymorphism, or the group selection story is needed, I don’t yet know. I’d be interested to see if there were some empirical ways to test which one is more likely to be true.

However, I’m suggesting that if you control for environmental variation, there’ll still be some behavioural diversity due to biological differences. For example, take a bunch of modern Western folk and plop them into a hunter-gatherer environment in the Amazon jungle, and they’ll probably change their attitudes and behaviours because of the radical environmental change. That’s due to plasticity. However, there’ll likely still be diversity and disagreement within the group after they’ve moved and adapted to the new environment, and this within-group diversity will likely correlate with personality differences. That’s the polymorphism. I hope that clarifies things.