Published by timdean on 20th January 2011

The first, vertical axis, represents whether an individual perceives the world to be a threatening or hostile place, or that they feel negatively disposed towards uncertainty or threat. Alternatively they see the world as being benign, non-threatening, or somewhere in between.

The second is whether they believe the world is a meritocracy, and that people get what they deserve, both good and bad. Alternatively, they see the world as being unjust, and the good and bad things that happen to people do so randomly or because of means largely out of their individual control, or somewhere in between.

Together, we can see how the various political psychological dispositions, and their corresponding ideologies, relate and how they differ.

It’s worth noting that this is not necessarily a representation of the political ideological spectrum as painted by political scientists or political philosophers. As I’ve mentioned before, they take a top-down view, and they talk about ideologies as abstract systems for the way society could be run.

This chart is about bottom-up political psychology, so the axes represent an individual’s perception of the way the world is, and their location on the chart shows which nearby political ideologies they’re likely to identify with. The ideologies themselves may make no explicit mention of a worldview or an assessment of the dangerousness or justness of the world (although these assumptions are probably implicit within the ideologies, which can be thought of as a way of ordering society if the world is dangerous/just to that degree). 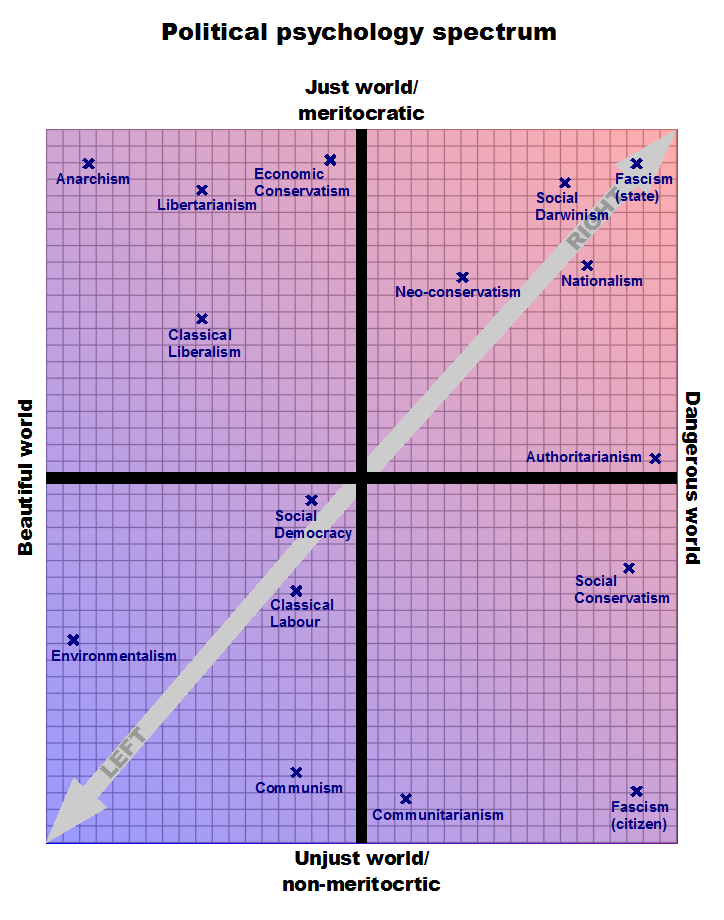 Let’s go through it ideology-by-ideology:

Anarchism (high Beautiful world; high Just world): anarchism attracts people who are largely optimistic about the world and about human nature, to the extent that they believe people will regulate their own behaviour and a state isn’t required to enforce a social contract.

Libertarianism (mid Beautiful world; high Just world): libertarians are also fairly optimistic, deciding that individuals should guide their own behaviour as much as possible, although conceding the need for a state to manage a social contract and prevent tragedies of the commons. Otherwise, they believe in letting people sink or swim under their own power, which carries the assumption that an individual’s success or failure is largely due to their own agency.

Economic conservatism (low Beautiful world; high Just world): economic conservatives are slightly less optimistic than libertarians, but they share a meritocratic worldview and believe people should be able to sink or swim under their own agency. The hallmark of economic conservatism is a rejection of state intervention in economic matters, believing that successful business should grow, and unsuccessful ones should fail, no matter the personal cost, because this is the best means to an efficient economy, thus allowing the deserving to succeed. Really, there’s probably a spread between economic conservatism and libertarianism, and many who identify with one or the other fall somewhere in between.

Classical liberalism (mid Beautiful world; mid Just world): classical liberals are fairly optimistic, emphasising the agency of each individual to pursue their own happiness, and they assume that their agency can yield that happiness, although they’re slightly more forgiving than economic conservatives and libertarians; they acknowledge that external circumstances influence our success, and they are more willing to let the state intervene to enable people to find happiness and protect them from dire misfortune.

Classic Labour (low Beautiful world; mid Unjust world): this is the position adopted by old-school unionists, who reject some of the meritocractic attitudes of classical liberal and libertarian views because they see the workers as unable to find prosperity through their own agency because they’re held back by bosses/owners of capital. They’re more interested in redistribution of wealth to compensate for the lack of natural meritocracy. One reason the movement may be waning is that with greater economic liberalisation and increases in middle-class wealth, society arguably has become somewhat more meritocratic, or is perceived as such.

Environmentalism (high Beautiful world; mid Unjust world): environmentalists and Greens are very optimistic about the world they want to protect, and are optimistic about human nature (and, I suspect, incredulous towards and horribly disillusioned by many of the horrible acts that occur in the world against other humans and against nature). Environmentalism is often associated with left-leaning and socialist attitudes because it believes the state should intervene to prevent business and rampant individualism from damaging the environment. That said, attitudes towards conservation of the environment could correspond with many other political ideologies.

Communism (low Beautiful world; high Unjust world): communists have a streak of optimism, believing that once people have their basic needs satisfied, they’ll want to work for the greater good rather than just being greedy individuals. But they emphasise collective endeavour to benefit all based on the belief that a free market will just let a few lucky capitalists and land owners control the wealth, even though they don’t deserve it as much as the hard-labouring workers.

Communitarianism (low Dangerous world; high Unjust world): the hallmark feature of communitarians is collective work, community coherence, stability and selflessness. They see the community as more important than the individual, largely because it assumes that in a meritocracy, some individuals might success, but many will be left behind and it takes a community pulling together in order for people to prosper.

Neo-conservatism (low-mid Dangerous world; mid Just world): on the other end of the spectrum are neo-conservatives, who value individual effort and agency, but are more pessimistic about the world and about human nature. As such, they do favour greater state intervention, being more tolerant of big government and bureaucracy than economic conservatives. Largely, it’s an outward-looking ideology, concerning itself with the dangers posed by other states, and taking a hawkish stance against them. You pretty much need to perceive your state as strong to adopt neo-con views though; only works when you’re the bully, not the runt.

Social Darwinism (high Dangerous world; high Just world): Social Darwinists see the world as a jungle: it’s dog eat dog out there, and only the strongest survive. If you let the weak be coddled, it’ll undermine society, and your state risks being overrun by a stronger state. As such, it advocates state intervention to prevent the weak from taking over, and enabling the strong to succeed.

Nationalism (high Dangerous world; mid Just world): nationalists see the world as dangerous and other nations as threatening. As such, they respond by promoting the values and virtues of their own state and fostering a competitive attitude towards other states, often framing international relations in zer0-sum terms. The Just world attitudes come into play when talking about states, not necessarily internally – so someone could be a communitarian and a nationalist by employing different frames in the two contexts.

Authoritarianism (high Dangerous world; neutral Just world): authoritarians favour a strong state to protect against internal disorder and external threat. You often see authoritarian attitudes emerge when the environment truly is hostile, such as in nations with limited natural resources or crumbling economies. Consider many middle eastern or African nations where individuals don’t trust each other enough for the implicitly optimistic liberalism to work, so it requires a strong hand to keep people in check and prevent them from screwing each other over.

Social conservatism (high Dangerous world; low Unjust world): social conservatism is largely a response to threat, uncertainty and a pessimistic view of human nature – such that people are generally bad and need self-discipline or a firm hand to keep them in check. As such, social conservatives are more conformist, more statist and more willing to sacrifice freedom for stability and security. It’s an uneasy alliance between social and economic conservatives. While they both oppose the blind optimism and freedom of liberalism and socialism, they have different views about conformity and how much freedom people should have to act according to their own will rather than the will of their community.

Fascism – state (high Dangerous world; high Just world): you might notice there are two points for fascism. The first is for the perception of the state and the world around it. They see a hostile world, with other states competing for advantage. This demands a strong state that can compete and triumph over the others.

Fascism – citizen (high Dangerous world; high Unjust world): however, internally, citizens perceive their roll in society as not competitive, but as part of a collective working towards the grand goals of the state. They are far more communitarian, anti-individualistic and conformist, even while the state itself is individualistic (acting unilaterally internationally) and non-cooperative.

So there you have it. The new and improved speculative two dimensional political psychology spectrum. There’s plenty of empirical evidence to suggest a two factor underpinning of political conservatism, at least psychologically, with high Right-Wing Authoritarianism and Social Dominance Orientation both predictive of conservative attitudes, but they appear to be somewhat independent of each other.

Still, this model would need empirical testing – which I reckon could run along the lines of questionnaires to assess perceptions of the world and then correlating those responses with questions about political attitudes. That’s a PhD in itself, so I’ll probably leave it at the armchair stuff for now.

Is this marxist communism or the soviet kind? Where would philosopher kings be on the list?

Also, it should be noted that this list is mainly about “economics,” but government structure is different issue. Democracy, republics, monarchies, oligarchies, etc. should be discussed at some point.

I think this is a beautiful conceptualisation, since it (correctly in my view) ascribes political beliefs to emotions, rather than rationalisations. I don’t understand why you changed safe-dangerous into beautiful-dangerous, though. Safe-dangerous is a classical psychological parameter (bold/timid, risk-taker/risk-averse).

Hi Tom. Interesting you mention the safe-dangerous scale. I’ve had other feedback on that, and I think I was mistaken to characterise that axis in that way. I’ll update the chart with safe-dangerous in the next iteration.