The current fancy of religion being intertwined with political conservatism in the United States (and here – we have our own Family First party) is a fleeting trend, and one that is entering its final throes. So said Robert Putnam in a wonderful lecture he gave tonight at Sydney University.

I’m inclined to agree – and not only because I want to agree. 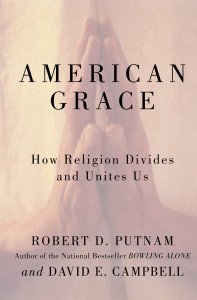 Putnam’s argument – also espoused in his new book, American Grace – was that the close relationship between religiosity and Republican partisanship that we see today only started in the early 1990s, and began as a wedge strategy intended to galvanise a conservative base against encroaching liberalism by appealing to the pervasive religiousness of most Americans, tapping in to socially conservative issues such as abortion as the hot buttons.

And it worked. Putnam showed evidence that around the early 1970s there was no correlation between religious attendance (as a proxy for religiosity) and partisan preference. In fact, in the late 1960s, if you were more highly devout, you were more likely to vote Democrat. But that had all changed by the 1980s, and particularly into the 1990s.

Makes sense. Old school Republicanism used to be represented by the north-eastern industrialists – hardly a religious bunch. Too distracted by money and cigars. Conversely, there were the ‘southern Democrats’ who, until the quakes of the civil rights movement rocked their foundations, were deeply religious but were working class and voted for labour and community issues.

But in the 1990s that changed. And it’s already beginning to backfire.

The United States now sports a record number of what Putnam drolly calls “young nones”; the now 18% of the population – and upwards of 30% of youth – who list their religious affiliation as ‘none.’ However, it’s presumptuous to assume they’re atheists; many still profess a belief in God, but they disassociate with organised religion.

Putnam’s thesis is that they see the vitriol of the religious right directed towards progressive social issues, and they identify religion – particularly evangelical Christianity – with homophobia, militant anti-abortionism, bigotry and other socially conservative positions that are thoroughly unsavoury to minds shaped by the liberal 1990s.

So they move on. Both from organised religion and from Republicanism. As the old conservatives – the relics of the pre-1950s world – die off, these ‘young nones’ will start to have a much greater impact on politics.

The upshot: perhaps we can hope for a world where religiously-fuelled extreme social conservatism is divorced from politics. In fact, let’s not hope. Let’s expect it.

Let’s stop giving credence to the extreme religious lobby. When they pop their heads up and spout some ludicrous line, such as that art should pass through a classification board, let’s just chuckle and say “well, extremists would say that” and move on to more important matters, like deficit reduction or mitigating climate change.

By crikey, it’ll be nice to look back on all this. To look back on the 2000s and remark at how aberrant this religiosity was. It may not take long before we’re looking back with a wince and a sigh and saying just these things.

But, in the modern environment, radicalism is linked to doubt, questioning, and skepticism. It’s unlikely ever to be strongly linked to religion – that genie is out of the bottle.

I was looking at it when I was a Catholic who had also been “born again” into a fundamentalist sort of religion. Jimmy Carter, who wore his religion on every sleeve may have had an effect on creating a religious conservative movement. The religious Southern conservatives had assumed he would be “one of their own,” but felt betrayed when he didn’t take a conservative line and oddly enough pushed Reagan through even though he was rather mushy on his own religious beliefs. But he was a conservative and they could use him to push their agenda’s through.

Even though I was fundamentalist and Catholic, I was a liberal and couldn’t square my political beliefs with what the Christian Conservative movement was saying. I couldn’t abandon my political ideology because they were, and still are, my basis in morality. Religion didn’t match, and I couldn’t make it match.

Religion went out the door, and I maintained my liberal political views. My kids’ political beliefs are also strongly liberal; they rally for gay rights, etc. I have hope, because their friends are moving the same way.

(You can imagine my disappointment when I went to college and found myself immersed in early Reagan conservatism.)

Economists Ed Glaeser, Giacomo Ponzetto and Jesse Shapiro have got an interesting explanation of the link between religion and US politics in their 2004 paper, “Strategic Extremism: Why Republicans and Democrats Divide on Religions Values”, http://www.economics.harvard.edu/pub/hier/2004/HIER2044.pdf

Their explanation also accounts for why the same strategy will not work effectively in Australia.

Interesting. I hope this is true. I find my own experience (as a grad student), is that many young people are not moving toward liberalism, but instead toward libertarianism (and Ron Paul). Not myself, but I see it all around me.

I’m not surprised young people are turning to libertarianism. I’ve written before about how the 20th century rendering of the political spectrum – along labor/socially progressive versus market/socially conservative lines – is obsolete in the 21st century.

It seems to me many under-30s are more in favour of markets (albeit regulated) than centrally planned economies, and more socially progressive than conservative. That’s closer to libertarianism than what the traditional Left & Right parties offer.

However, when you look closely, libertarianism is actually a fairly extreme ideology, and it can very easily turn ruthless and insular, a la Ron Paul or Ayn Rand. So I wonder how many young people will stick with libertarianism once the old parties inevitably collapse and remake themselves along more moderate lines.